As you may have guessed from the title of the post, we are going to talk about multivariate adaptive regression splines, or MARS. MARS is multivariate spline method (obviously) that can handle a large number of inputs.

The MARS fitting procedure is is a two stage process. The forward stage is the same idea as forward stepwise regression. This could result in a large number of terms and overfitting so the backwards stage tries to mitigate this be dropping some terms.

For the backward stage of the fitting procedure we simplify the model by deleting terms. The choice of which term to remove is based on which one results in the smallest increase in error upon removal. This gives us a bunch of different models each with a different number of terms. The final model is chosen using generalized cross validation (GCV). We could use regular cross validation too but this is more expensive computationally. We won’t get into the details of GCV here. Basically, we apply a formula to each model (that have different numbers of terms) and pick the best one.

When I first saw that all the basis functions were linear I wondered why we didn’t include higher powers. Why not follow the same fitting procedure but consider for example \((x-t)_{+}^2\) in addition to the linear terms? Apparently there is a good reason for this that Hastie and friends discuss in The Elements of Statistical Learning. When the MARS basis functions are multiplied together, they are only nonzero over a small part of the input space and zero everywhere else. So the regression surface is nonzero only when it needs to be. Higher order polynomial products however, would give a surface that is nonzero everywhere which apparently wouldn’t work as well. The zeroness of the linear basis function products also has the effect of saving parameters as we only need parameters in the nonzero parts. With a high dimensional input space this is especially important. As usual, there are also computational reasons but we won’t worry about them here.

Let’s look at an example. Previously we made up some data so we could see how fitted models compared to their truths and didn’t look into the model fitting packages much. This time we will focus on getting familiar with the R package earth, which implements MARS. The data we will use is included in the package. ozone1 contains ozone readings from Los Angeles along with several covariates. Let’s start by loading the data and fitting a MARS model:

It looks like there were 20 model terms under consideration and 12 of them were included in the final model. Termination condition: Reached nk 21 tells us that the forward pass stopped when it reached 21 terms. earth chooses this number based on the number of inputs but we have the option to change it.

What can we do with an earth object?

As expected we have the usual methods like summary, residuals, etc. Let’s see what plot does. 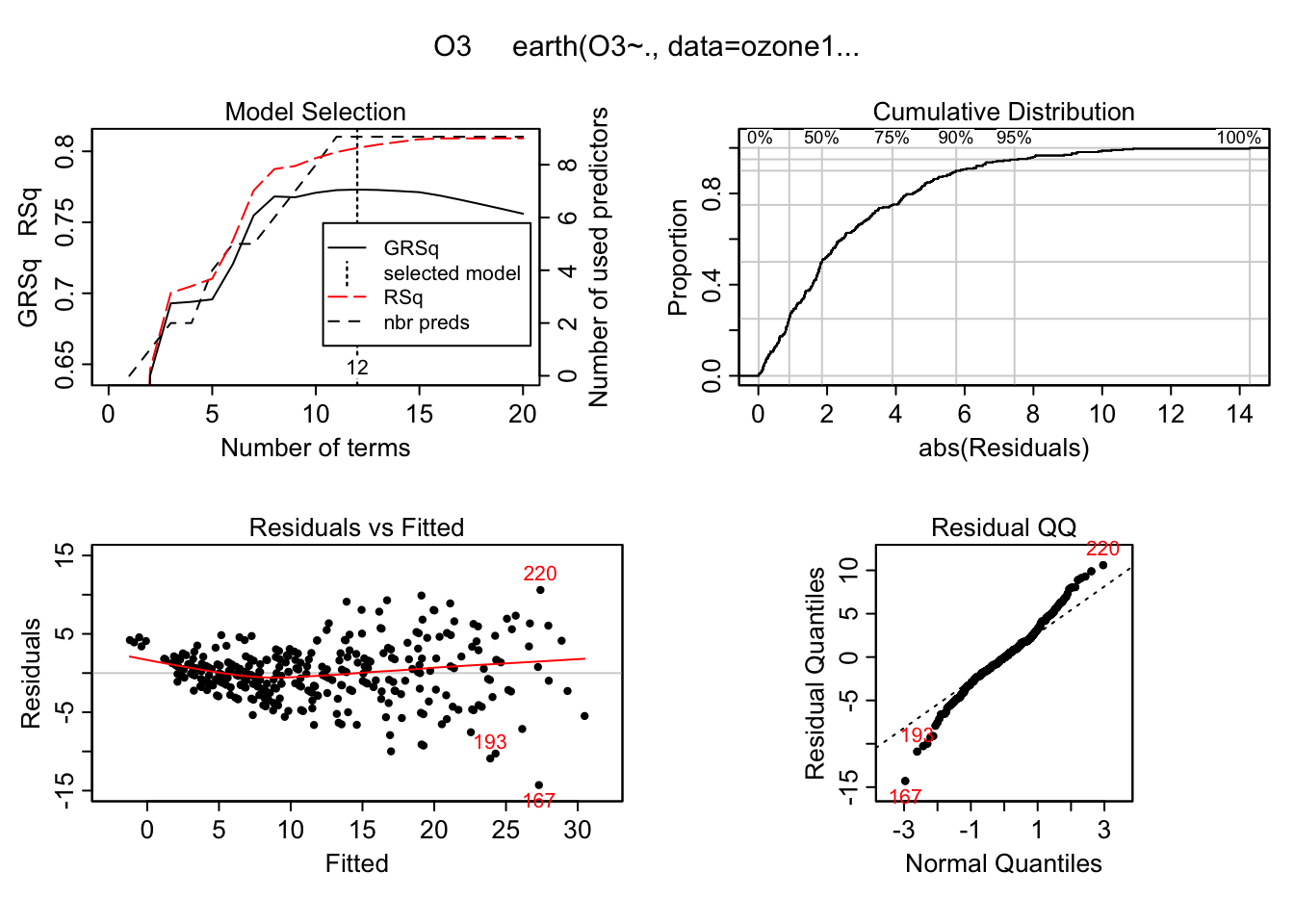 This shouldn’t be surprising. Usually plotting a model objects gives residual plots. We can also get two types of variable importance measures and there is a plotting method for them as well.

When looking at the methods I was curious about the plotmo methods. After a quick search I found that plotmo is a package for plotting regression surfaces. It’s written by the same person who wrote earth, Stephen Milborrow. Le’s see what it does. 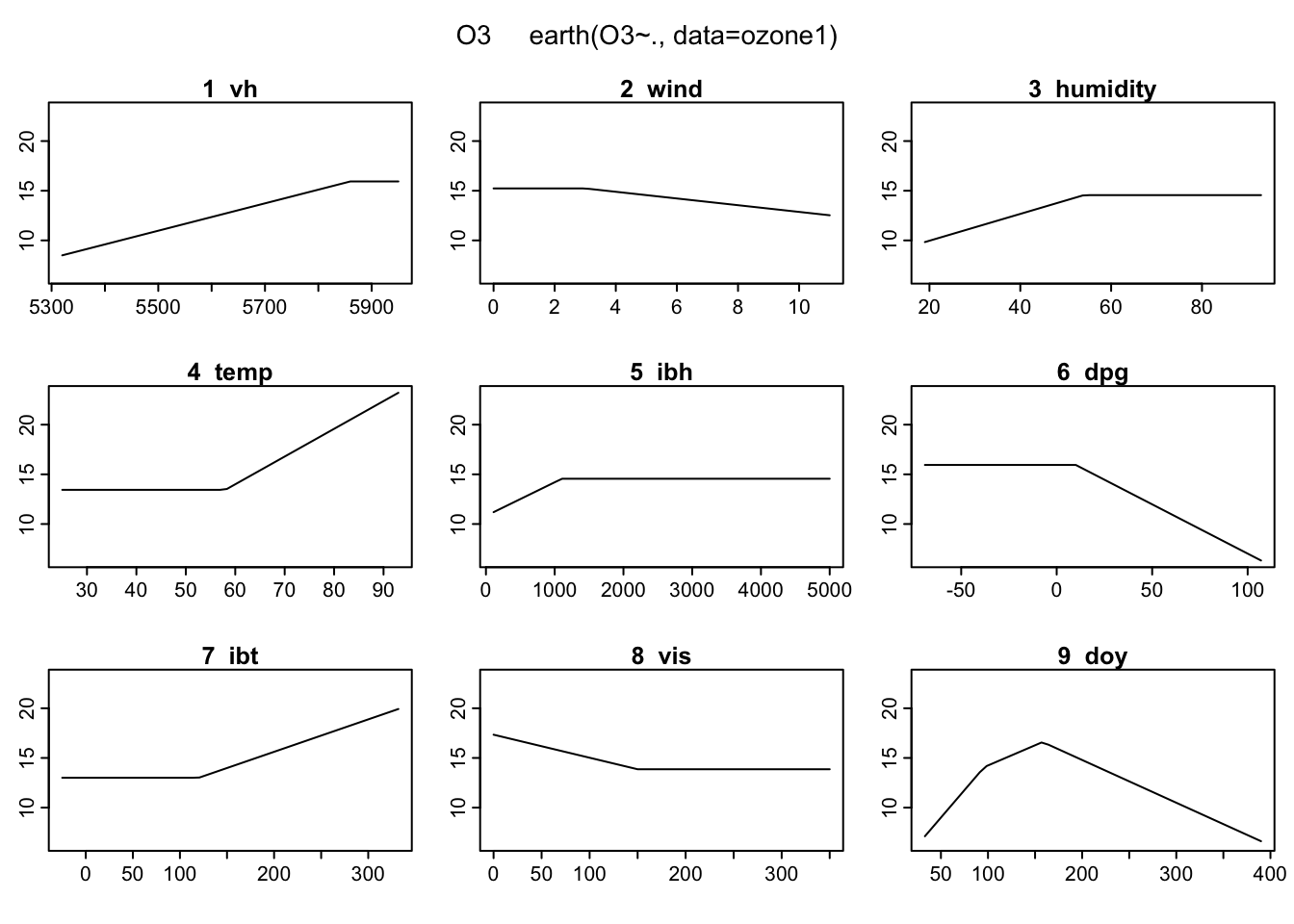 This is pretty cool. It shows us the basis functions for each of the input variables. But the plotmo description says it can plot surfaces. After some more digging I figured out how to do this. By default, earth doesn’t include interaction terms like \((x-t)_{+}(x-r)_{+}\). In order to get a surface plot, we need to have interactions because we need two input variables. We can do this by modifying the original model. 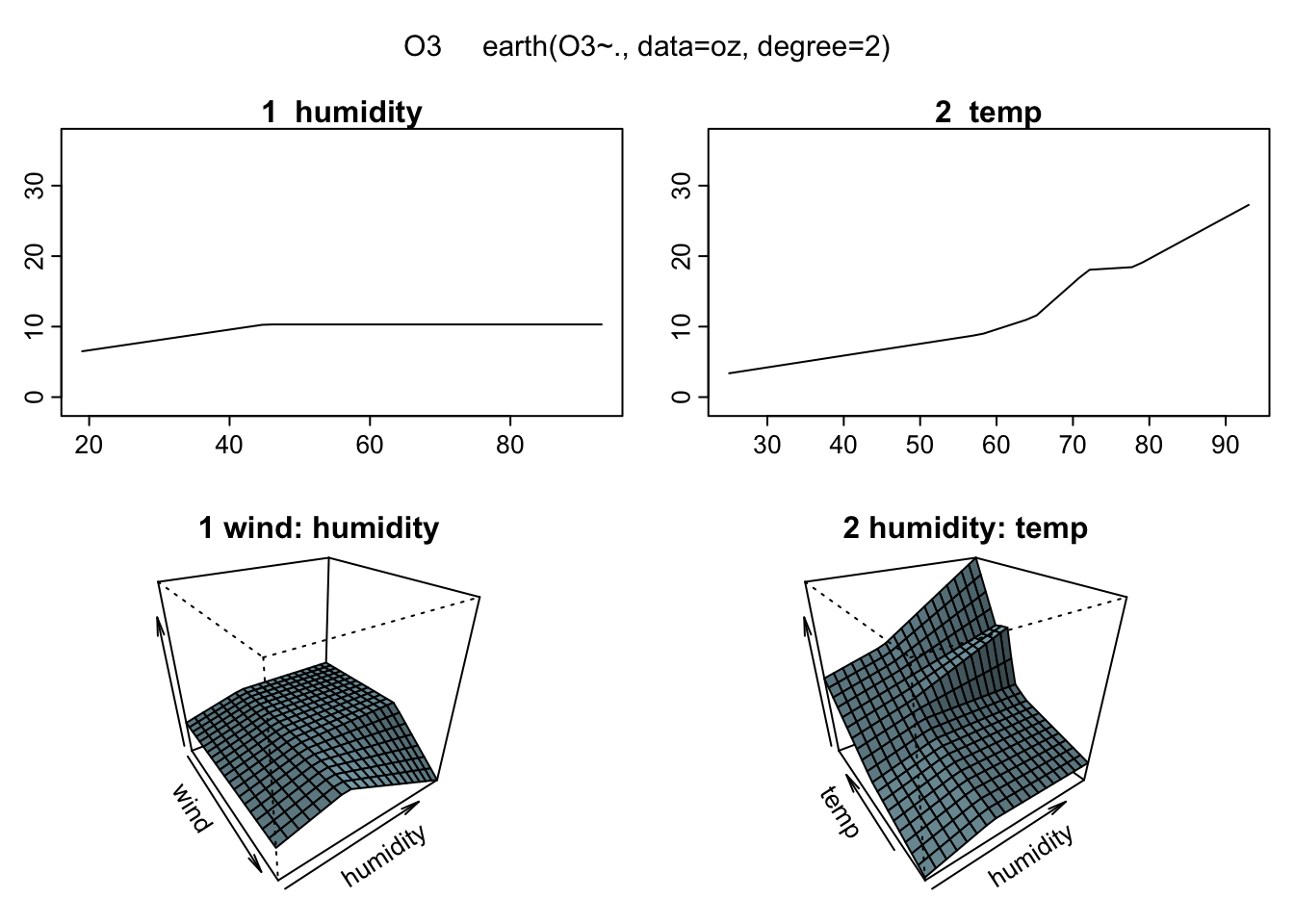 This is fantastic! It let’s actually see how the regression surface is built up instead of just looking at a bunch of error numbers. Unfortunately, unless you live in a higher dimensional world you can’t see the full surface. But for the rest of us this is as close as we can get.

A Few Notes On earth

We just looked at a few features of the earth package here but there is a lot more we could do. For example, the earth function has a bunch of options one could play around with. There is a vignette that goes into more detail about the package that I suggest you take a look at. It gives more detail on the forward and backward passes and some of the limitations of the package (e.g. no missing values). If you like the regression surface plots I recommend you also check out the plotmo vignette Plotting regression surfaces with plotmo.